Supplementary heating when no oil or gas is available 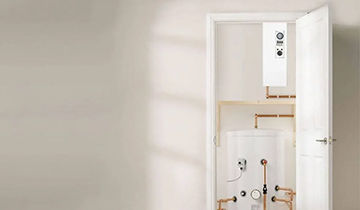 James Warlow is an Architectural Technologist living in Norfolk and has a career spanning nearly 47 years in architecture. James lives in a 3-bedroom detached bungalow in the mid-Norfolk countryside which required some additional occasional heating as and when during the colder months. There is no gas in the village and no suitable (out of sight) place for an oil tank.

James explains how he was able to use a 6kW Electric Flow Boiler from ThermoSphere as part of his low cost and energy-efficient heating system in his home which generates double the amount of kW/h compared to what the property consumes.

The property generally is fine during cooler months with underfloor heating providing enough background heat during the day and has proven very economic. It runs from 6.30 am till 6.00pm and is set at 20 deg. But on some of the colder days there’s the occasion when the radiators need to be run for a boost.

These are fed from the thermal store and within minutes of turning the thermostat up there’s hot water in the rads and rooms start to heat up. However, within around 15 mins the temperature in the thermal store is dropping to a point where it could impact on domestic hot water temperature so rads are switched off therefore a solution was needed to get over this.

What are the options?

Options 1 – 3 ranging in cost from £7,000 to £12,000 (for air source) with lots of disruption within the home. The Solar PV export a considerable amount of electricity back to the grid for which we get good FiT payments. This combined with the RHI we get for using the Solar Thermal means we get back roughly the same as we pay out for electric!!!!

An electric boiler was a no brainer and after much research we ended up with a Thermosphere 6kW with pump that we could run in conjunction with the Thermal Store which radiators are fed from. Unfortunately, it appeared no one we spoke to had ever done this before so after a lot of head scratching, I made a plan with my plumber and electrician.

The Idea and making it work

What needed to happen was when heat to radiators was required the water would first come from the thermal store (as long as it was hot enough – I’ll come to that in a minute) until the temperature had dropped to a set point at which time the ThermoSphere’s Electric Flow Boiler would start up heating already hot water in radiators but without needing to heat the whole thermal store meaning we wouldn’t need the full 6kW heating from cold.

The valve needed to remain in an open position allowing the thermal stores to pump to feed the radiators until the temp dropped to an agreed figure ensuring enough domestic hot water. We arrived at min 45 degree but something that could be adjusted; so, an adjustable temperature sensor was fitted to the pipe directly above the thermal store pump. When the temperature dropped to 45 degrees the store pump would stop, the 3-way valve would open and the electric boiler fires up pumping the now already hot water round the radiators.

With the electric boiler fitted and all pipework done we now needed the electrician to do his bit. Firstly, we realised we need two power supplies to the boiler; one for the boiler itself with the other to power an additional switching relay in the boiler. This relay controls the heating on and off via the motorised valve so ensures the boiler isn’t constantly running. After a few minor hiccups we finally got it sorted and installed a Honeywell Evohome system with smart radiator valves allowing each room temperature to be controlled as a zone which can also be controlled from a smartphone and also manually via a small screen.

To complete the set up and help maintain the thermal store temperature we decided to make use of the Solar PV and fitted an excellent diverter by My Energi. It’s called an ‘Eddi’ and uses excess Solar PV, converts it from DC and sends direct to the immersion heater. This is fitted in the airing cupboard and has a connection called ‘Harvi’ which connects to the main supply tails near the board fuse. This transmits wirelessly to the Eddi controlling the supply so even on cloudy days there’s a trickle of energy from the PV direct to the immersion. You can then install their ‘Hub’ to control via your smartphone. The ‘Eddi’ can be connected to two heaters and shows via the ‘Hub’ what you’ve generated – all very useful

This kit was able to be installed in the cupboard where the thermal store is housed which also forms an airing cupboard. Although we will be using more electricity in the colder months clearly the ‘Eddi’ will help boost the store temp meaning less use of the electric boiler and therefore lowing our carbon footprint.

The results and looking ahead

The system has been working for a couple of months and works very well and energy use is way below energy generation. There was one slight worry in that when the electric boiler shuts down it needs the pump to run for around 10 minutes to preserve elements. We weren’t fully sure to start with where the pumped water was going as the motorised valve was closed. We then realised it simply went back into the store already warm and dispersed.

To my astonishment the cost for the boiler, pipework and electrics came in around £2300. The Eddi £395, Harvi £55 and Hub £85 come from www.myenergi.com. The Evohome System was £479.99 from www.theevohomeshop.co.uk.

A few pictures showing installation, Eddi at work and my consumption. 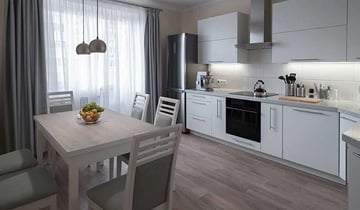 ‘What’s the best underfloor heating for vinyl floors?’ is not an uncommon question we get asked. Vinyl flooring is becoming a more popular floor...

It’s that time of the year where we take an honest look at bathroom design trends for 2023. So, we’ve scoured the internet, read through a heap of...

What are the disadvantages of electric heating?

The energy crisis and extreme price volatility in fossil fuel markets has had a dramatic impact on the cost of living for many homeowners, and as a...